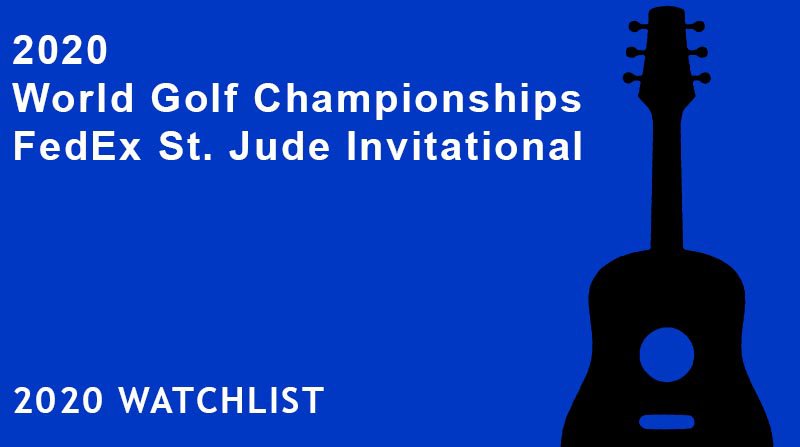 Our watchlist struggled a bit last week in the 3M Open, but we did see Tony Finau come in a tie for third and Harris English tie for 18th. It would be nice to see Finau win a tournament; he is obviously extremely talented but just cannot close the deal. Harris English is a player to keep an eye on in the future. It does not seem like he has the makings of a superstar, but he is becoming a very solid player and has racked up a lot of top 10 and top 20's this season.

This week the PGA Tour is in Memphis, Tennessee at TPC Southwind for the 2020 WGC FedEx St. Jude Invitational. This is only the second official year for this event as part of the World Golf Championships, but the FedEx St. Jude Classic was played on Tour for years and was also held at TPC Southwind. In prior years the event was held the week before the US Open, so it did not always attract a lot of attention from the Tour's top players. Now, as a WGC event, it is a limited field of 78 of the best players in the world and nearly all of them will be in attendance. The only real notable players sitting out this week are Adam Scott and Tiger Woods.

While there has been a tournament at TPC Southwind for many years, the overlap between that field and the field that is showing up this year is pretty small. As such, we have a bit of a course history problem.

There is no cut this week so it is a good opportunity for us to see all the top talent in the world get four solid rounds in leading up to next week's PGA Championship. Here is who we are keeping an eye on this week:

Daniel Berger had a rough go at the Memorial a couple of weeks ago, but has had four top five finishes in his last five starts including a win at the Charles Schwab Challenge. Oh yea... he also won the FedEx St. Jude Classic in both 2016 and 2017 at TPC Southwind, so it seems like he might know a thing or two about the place.

Bill Horschel has been trending in the right direction recently after a bit of a bumpy start coming off of the break. He finished T7 at the Workday Charity Open and T13 in the Memorial which had a very strong field. He's generally done well at TPC Southwind with five top 10 finishes in his last six starts there.

Rory McIlroy has to get his act together and this could be the exact spot for him to do it. We are all familiar with his resume, so we will not review it here today, but he's definitely underachieved since the return from the break. That being said, it has not been a total disaster. He's made every cut, but has been plagued with a bad round here and there that has been taking him out of contention. He finished in 4th place last year in the event after entering the final round with a one stroke lead. We'd love to see him close one out this week.

Webb Simpson has been a bit inconsistent since the return from break. He has missed two cuts in four tournaments, but has also had a first and eighth place finish. He finished second in the event last yea and is definitely capable of repeating that success. We expect Simpson to be in contention this week.

Viktor Hovland has turned in six solid performances since the return from break, but has not yet broken through. He has risen to 21st in our power rankings and it is only a matter of time before he takes one of these things down. We are rooting for him.