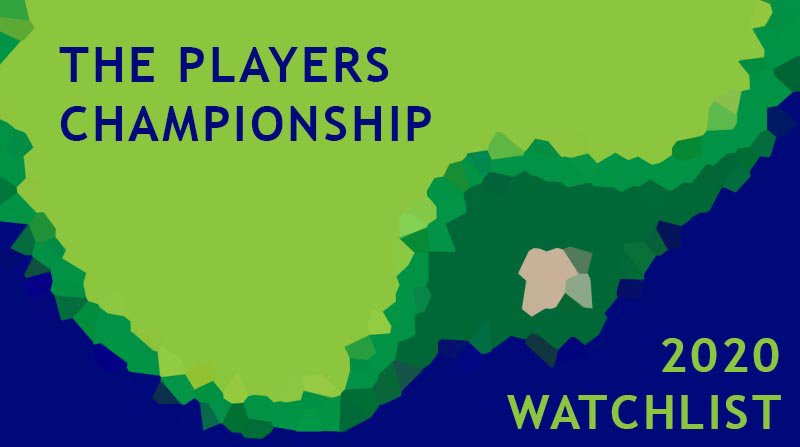 Last week at the Arnold Palmer Invitational, Bay Hill showed its teeth as a true test for the world’s best. Our model ranks the third and fourth rounds of the API as the two most difficult scoring rounds of the season with the second round ranking as the fourth most difficult.

Tyrell Hatton, who has made an appearance on our watch list recently, held off for the win. His been shooting our up our Power Rankings and currently sits in third behind only Rory McIlroy and Jon Rahm. Rory McIlroy continued his streak of finishing in the top five. He has now finished inside the top five in every one of his six starts on the PGA Tour this season and his streak extends back almost seven months ago when he won the Tour Championship.

This week the PGA Tour hosts its premier tournament, the Players Championship. This event has the strongest and deepest field every year consisting of 144 of the top PGA Tour players. No amateurs, no legacy players and past winners, just the best players the PGA Tour has to offer.

As always, we have crunched the numbers and believe the following players are worth keeping an eye on this week:

Rory McIlroy, as mentioned earlier, has not finished outside of the top five on the PGA Tour in almost seven months. As number one in our power rankings, and as the defending champion, he should absolutely be considered the favorite to win this week.

Jon Rahm is coming into the event ranked 2nd in our power rankings. I know… we are not really stepping out on a limb here going chalk-chalk with our first two picks, but we have a reason. Rahm has been playing very solidly this season, as evidenced by his ranking, and was in serious contention last year until imploding in the final round. He’s a better player this year than he was last year.

Webb Simpson is coming into this event in the best form he has been in his career. He has also performed here well in recent history with two top 20 finishes and a win in the last three years.

Abraham Ancer has been slowly and steadily been rising in the power rankings since he made his PGA Tour debut. While his game was off a bit at Bay Hill, based on his current form and his performance at TPC Sawgrass last year, we think this is a good spot for him to potentially breakout.

Joel Dahmen is currently ranked 46th in our power rankings but has been shooting up rapidly since the beginning of the year when he was ranked 125th. He is coming off two top five finishes against strong fields at both the Genesis and Arnold Palmer Invitationals. He also had a strong showing the Players Championship last year finishing tied for 12th in his first start at TPC Sawgrass.