Watchlist: The 2020 Northern Trust
The 2020 playoffs are upon us. This week the PGA Tour heads to TPC Boston for the 2020 Northern Trust. 124 of the top 125 players in the FedEx Cup rankings are in the field this week. Find out who we are keeping and eye on.
By Jeremy Phillips 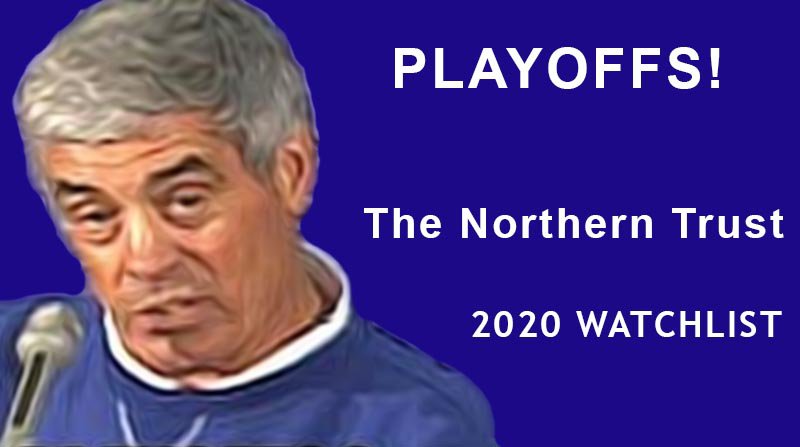 The 2020 FedEx Cup Playoffs are here and 124 of the top 125 in the points standings are teeing it up this week at TPC Boston. By our count, 40 of the 124 players in the field this week are playing at TPC Boston first time (or for the first time since 2015). This includes one of the hottest players on tour right now, Collin Morikawa.

Last year the Northern Trust was played at Liberty National Golf Club. TPC Boston was historically the site of the Dell Technology\ies Championship, but this tournament was removed from the playoff schedule when the PGA Tour cut the playoffs from four events to three events. This year TPC Boston was added back to the rotation as the site of this week's Northern Trust. This creates somewhat of a course history problem for us because we do not have course history for players who broke onto the scene in the last two seasons.

The Northen Trust is the only playoff event with a 36 hole cut. With only the top 70 players in the points standings moving on to next week's BMW Championship, many players' playoff hopes will come crashing down in the first two rounds this week. Some players will be playing with more of a sense of urgency while others can relax knowing they can coast into the tour championship.

The stakes are high this week. Here is who we are keeping an eye on:

Si Woo Kim shot up to number 10 in our power rankings after finishing in T13 in the PGA Championship and T3 in last week's Wyndham Championship. The man plays a lot of golf. He has played in 23 tournaments this season including in every week since the restart in June. He's historically overperformed at TPC Boston finishing in the top 40 in each of his three appearances including a 15th place finish in 2016.

Abraham Ancer is currently ranked number 17 in our power rankings. He hasn't really broken out this season, but he does have four top 15 finishes in his last six starts. He played in the Dell Technologies Championship at TPC Boston in 2018 and finished in 7th place.

Patrick Reed won this event last year and seems to rise to the occasion in big spots like this. He is currently ranked 13th in our power rankings and has had three top 15 finishes in his last four starts including in the Memorial and the PGA Championship which both had loaded fields. While his victory in the event last year was at a different course, his history at TPC Boston is pretty solid also with a 4th, 5th, and 6th finish in the Dell Technologies Championship from 2015-2017.

Bryson Dechambeau is in a virutal tie for the top spot in our power rankings. He has obviously played extremely solid over the last few months with five top ten finishes in his last seven events. He played in the Dell Technologies Championship at TPC Boston in both 2017 and 2018. He finished in 30th place in 2017 and won the event in 2018. We consider him the favorite to win this week.

Tiger Woods hasn't played much golf lately, but is hoping to get in a few tournaments before the US Open next month. He currently sits at 49th place in the points standings. If he makes the cut this week he will be virtually gauranteed a spot in next week's BMW Championship, but he will need to put a couple good tournaments together to make it into the top 30 and get into the Tour Championship.