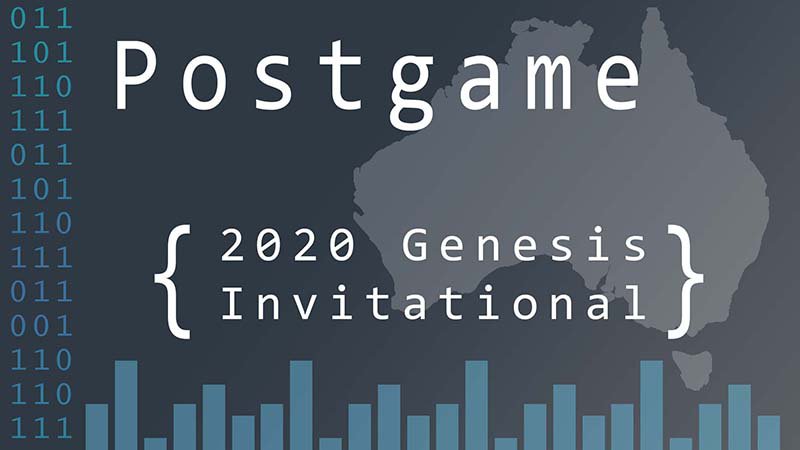 Adam Scott returned to the PGA Tour winner's circle for the first time in nearly four years with a two-stroke victory in the 2020 Genesis Invitational played at Riviera Country Club.

Scott entered the final round in a three-way tie for first with Matt Kuchar and Rory McIlroy. After a fast start which included two birdies in the first three holes, Scott had sole possession of the lead but quickly gave it back with a bogey and double bogey on fourth and fifth holes. Ultimately, Scott was able to recover by playing his remaining holes at two-under par to finish with a one-under 70 and a tournament total of 273.

Sunday was the toughest of the four rounds this year at Riviera with our models estimating it played 1.15 strokes more difficult than the average of the first three rounds. Fortunately for Scott, his competition at the top of the leaderboard faired poorly on Sunday with all of the round's best scores coming from players that were well off the lead. Scott's final round 70 was the best score from the top five 54-hole leaders by 2 strokes and Sung Kang's final round 69 was the only player within three strokes of the 54-hole lead to post a better score than Scott.

We have not seen Adam Scott in action on the PGA Tour since the WGC-HSBC Champions in early November where he tied for 11th. Scott also won the Austrailian PGA Championship in December, however since our models are only based on PGA Tour results at this point, it does not factor into our analysis. It is also worth noting the Austrailian PGA Championship had a relatively weak field an is likely not a strong signal of performance.

Scott went into a slump beginning at the end of 2016 with his worst form coming in late 2017. He showed steady signs of improvement throughout the 2018 and 2019 seasons. He was competitive in a few events, including the 2018 PGA Championship at Bellerive where he finished in third place behind Brooks Koepka and Tiger Woods. Since the middle of 2019 his form rating has hit a bit of a plateau which suggests this may be as good as it gets for Scott. Even if this is as good as it gets, it's pretty good. He is now currently ranked 5th in Golf Foresite's Power Rankings, up from 10th last week. Scott also moved from 14th to 7th in the Offcial World Golf Rankings. 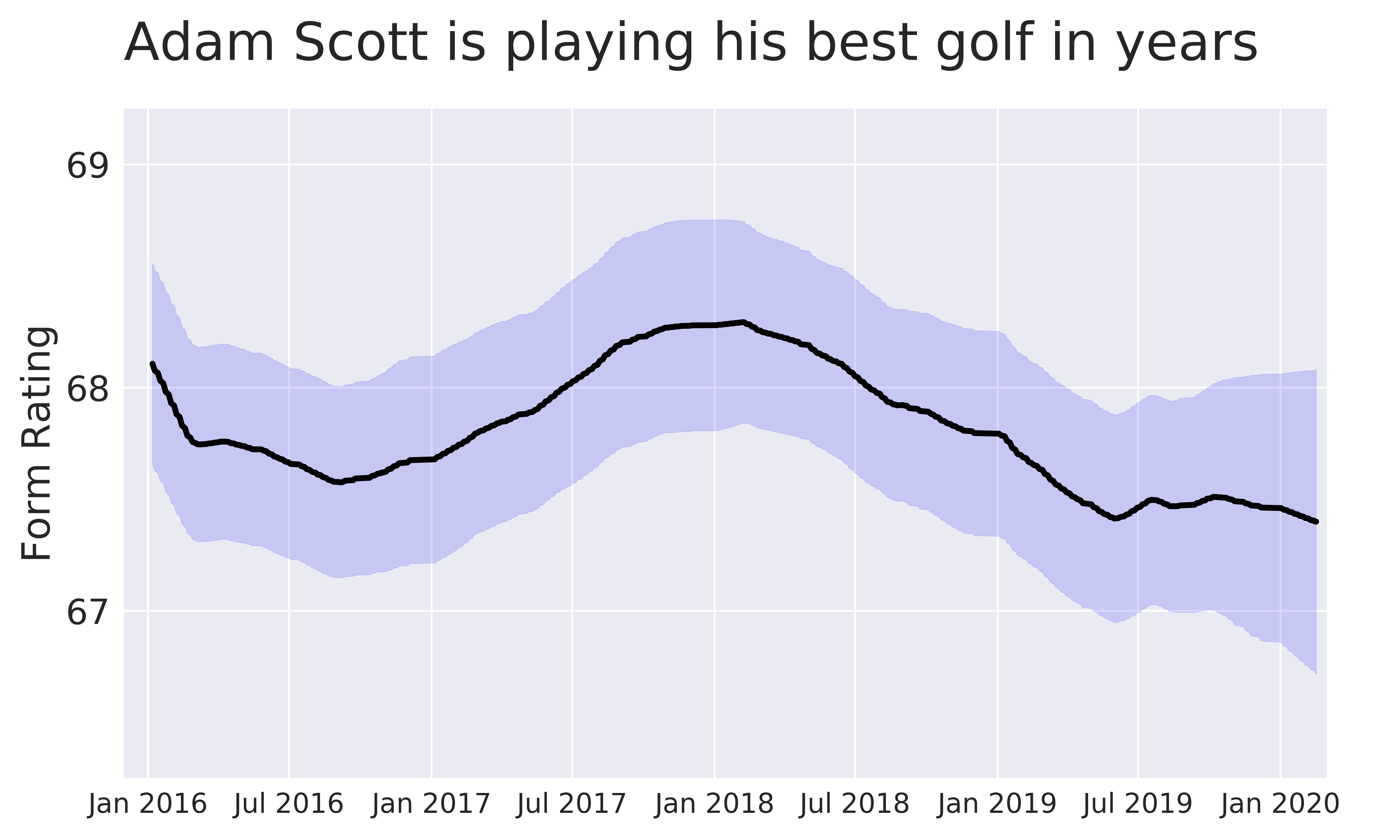 The chart above illustrates our model's estimate of Adam Scott's form rating over time. His form rating currently stands at 67.4 which is the lowest it's been in our data (2015 - present).

Rory McIlroy finished tied for fifth this week, which, believe it or not, is his worst finish since the 2019 BMW Championship nearly six months ago. McIlroy remains the number one in our power rankings.

Tiger Woods played well enough to make the cut thanks to a solid opening round. His weekend performance, however, was horrendous and he finished in last place among those players that made the cut. 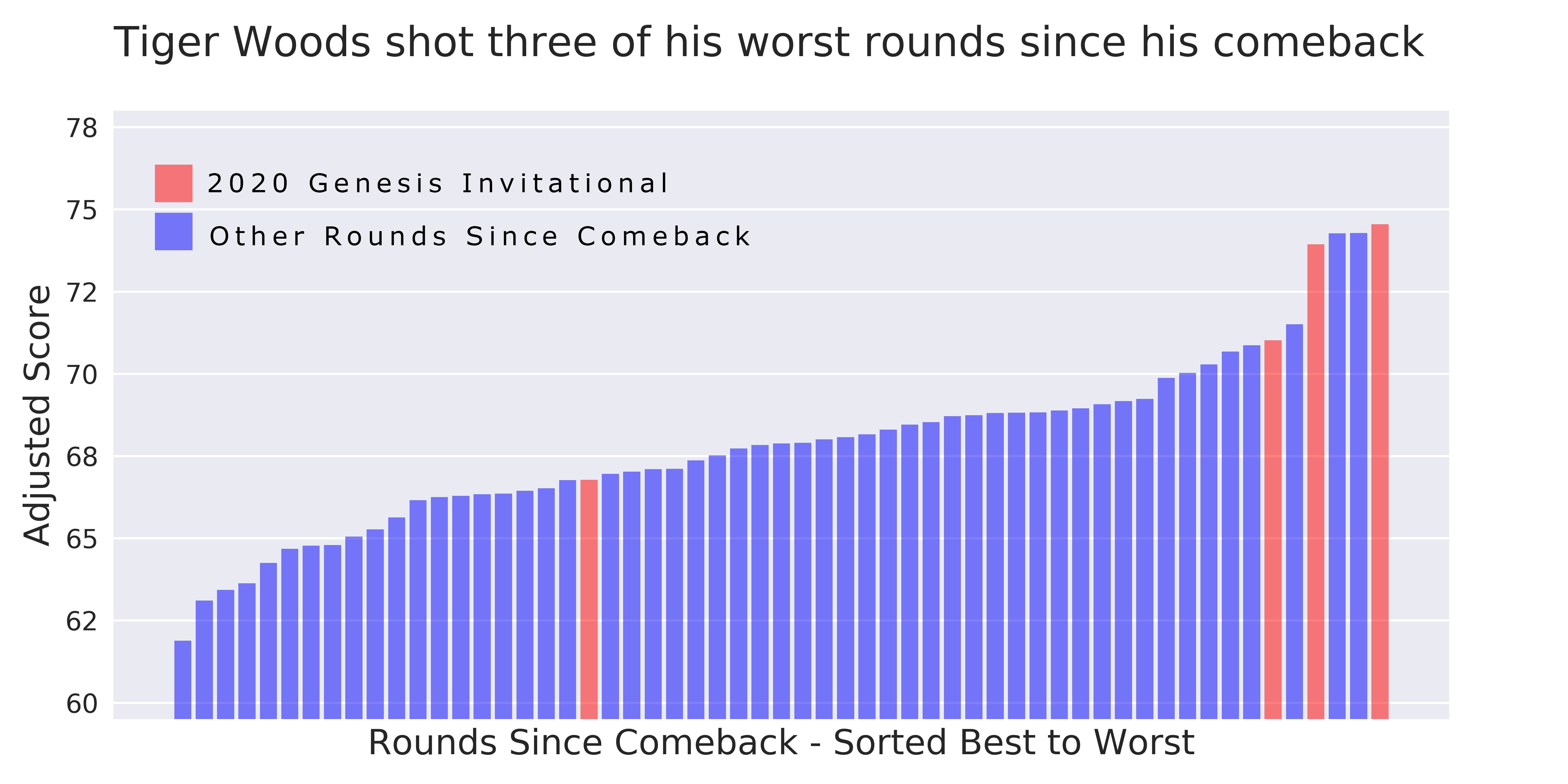 All of this has led Woods to drop 18 spots in our power rankings, from fifth to 23rd. With him sitting out this week's WGC Mexico Championship, we expect his next start to either be the Honda Classic or the Arnold Palmer Invitational.

This week the PGA Tour heads to Mexico for the WCG Mexico Championship. Please check back later in the week for our preview and predictions for the event.